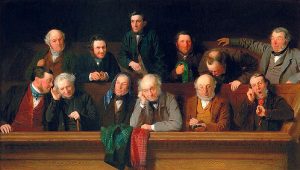 Your peers (well, not YOU, brother).

Look, I’m all for restoring ex-convicts to the full status of American citizenship. If you are deemed safe enough to be allowed free, then you are once again a part of society and should be treated as such. So I’m all for this new legislation in California that will allow ex-felons to serve on juries.

Just, don’t tell me you’re doing this to get “black” people on juries. That’s not the point here. Yes, incarceration disproportionately affects African-American communities. Yes, refusing to restore the rights of ex-cons disproportionately affects African-American communities. Yes, the restoration of rights are withheld because those most affected are disproportionately black and brown. All of that is true. But these quotes from local officials in San Francisco really pissed me off. From the San Francisco Examiner:

Boudin called the legislation a “significant step” toward ending racial disparities in the criminal justice system.

“Up to now, California law bars anyone with a felony conviction from serving on a jury,” Boudin said. “This disproportionately silenced people of color and prevented many people from being tried by a jury of their peers — a fundamental pillar of our justice system.”

For Raju, the change in state law means people with real experiences in the criminal justice system will be able to share their “invaluable” perspectives in the jury room.

He also said the legislation will help people with felony convictions reengage in society.

“It is very common for an African American client to look around the courtroom and feel that they do not have a jury of their peers, as there may not be a single seated African American juror,” Raju said.

Listen, fellow do-gooders, the reason African-American defendants cannot get a jury of their peers is because prosecutors use their peremptory challenges to exclude all the black jurors. Do not act, even in your zeal to make this important change, like you can’t get a diverse jury in San Fran Freaking Cisco because all the black people are in jail or just out of lock-up. You can’t get a fair jury because prosecutors exclude fairness.

Prosecutors regularly use peremptory challenges in a racially biased manner, and this new legislation does nothing to stop them. That’s because the core of the problem is that Batson is a load of crap. Prosecutors are easily able to avoid the race-neutral test laid out in Batson v. Kentucky, PRECISELY as Thurgood Marshall predicted they would in his concurrence in that case. Let’s listen to old Justice Marshall for a second, shall we?

This is your problem, California. It’s not that felons aren’t allowed on juries, it’s that black people aren’t allowed on juries if the prosecutor has a modicum of creativity when inventing a reason to exclude them. And if California prosecutors are already good at excluding NON-CRIMINAL black people from juries, you can imagine the field day they’re going to have with a potential juror with a rap sheet.

Don’t get me wrong, it’s still a good law. Well, it’s a good thought. But until you deal with the racist prosecutorial elephant in the room, the Sixth Amendment rights of black and brown defendants will still be nothing more than a theoretical promise, as opposed to a reality of justice.