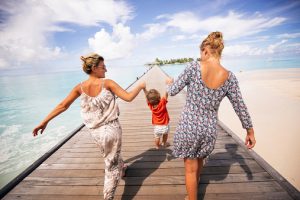 In 2015, a same-sex female couple in Indiana tragically lost their twin babies during a premature childbirth. But in a bizarre application of Indiana law, while both parents were permitted to be named on the children’s death certificates, one parent — the parent who was not genetically related to the children — was denied the right to be listed on the children’s birth certificates. The couple challenged the Indiana laws that were at play, joining several other same-sex couples in the litigation. Eventually, the couples won an injunction in federal district court.

Indiana appealed to the U.S. Court of Appeals for the Seventh Circuit in 2017. On appeal, the Indiana Attorney General’s office argued that state law requires that the biological parents of a child must be listed on the child’s birth certificate. In other words, the right procedure for a same-sex female couple would be to list a sperm donor on the original birth certificate as the “father.” And then, go through an adoption procedure for the nongenetically related mother. Once that adoption was completed, the couple could request a reissued birth certificate. Oh that’s all? Actually, that’s quite a lot of red tape! And confusingly, the same standards apparently did not apply to an Indiana death certificate.

What Is Marital Presumption And What If The State Discriminates As To Who Gets The Presumption?

The plaintiffs argued that Indiana law was being applied in a discriminatory manner. For instance, Indiana law provided a presumption that any man married to a woman giving birth was presumably the father — the biological father — of the baby. That was true even if the couple had used a sperm donor in order to have a child. But Indiana declined to apply that same presumption when a woman was married to a woman. So a heterosexual couple using a sperm donor avoided quite a few headaches that a same-sex female couple had to overcome, in order to reach the same legal position as parents.

The Indiana attorney general argued that the state’s laws were not discriminatory, since all couples were being treated the same. Every woman giving birth should know that when filling out the “father” portion of the birth certificate under Indiana law, the law required her to write the information for the “biological” father –- whether he be an anonymous sperm donor or other –- and not necessarily her spouse. The attorney general further argued that if a woman were to write her husband, and he was not the biological father, then her husband would not have any parental rights to the child. Of course, this argument obfuscates the underlying issue at stake — that the marital presumption only applies to heterosexual couples, and that the state is only objecting when same-sex couples list both parents on the birth certificate.

But, But … Obergefell And Pavan

Last week, the Seventh Circuit FINALLY ruled in the case known as Henderson v. Box … two and half years after arguments before the court, and just at the three-year mark after the case was appealed in 2017. In a victory for same-sex parents throughout Indiana, the appeals court ruled in favor of the parents. The judges on the panel were Flaum, Easterbook, and Sykes; Ford, Reagan, and George W. Bush appointees, respectively.

The court acknowledged that, yes, a man listed on a birth certificate, upon contest in Indiana, can be shown not to have parental rights to the child. However, the court pointed out that even with a “bursting-bubble presumption” –- one that vanishes as soon as it is contested — the presumption has consequences for parental rights. Unless the presumption is, in fact, contested, the husband is deemed the father (regardless of biological parent status), with full parental rights and parental duties, in a way that both women in a female-female marriage are not.

The court noted that the spouse of the woman giving birth may, indeed, be the biological mother of the child. One set of the plaintiffs in the lawsuit are an example of this. The couple went through “reciprocal IVF” — where one spouse gestationally carried and gave birth to the child, and the other, through an egg retrieval and in vitro fertilization, was genetically related to the child.

Of course, this should have been an easy case all along, and resolved much sooner. We already know from SCOTUS rulings in Obergefell and a subsequent cased called Pavan that same-sex couples are entitled to receive the same “constellation of benefits” as different-sex couples. That includes parental rights. So if a man married to a woman gets the presumption of parenthood, a woman married to a woman, or a man married to a man, must receive the same presumption. Equally. Indeed, the Court’s opinion was a breezy 10 pages explaining this rationale.

Nice work to the court coming to a sound decision as to the plaintiffs’ rights to equal treatment under the law. If you are going to take 32 months to write a 10-page decision, you definitely want to get it right.

Of course, in less helpful news, the court specifically noted that the question as to “all-male” couples was “expressly left open for resolution by the legislature or in some future suit.” The court also made clear it was not ruling on any parental rights that a biological father — such as a sperm donor — might have to the child of a same-sex female couple. So all you donors out there, keep your eyes open for future similar cases.