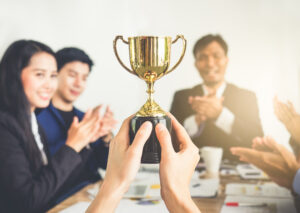 Bowl of Dicks guy is the hero the legal profession deserves, not the hero we need right now. With disease running rampant, the stock markets in freefall, law schools shuttering for who knows how long, courthouses closing, prisons at risk, and law firms… allowing everyday casual, we probably need someone to reclaim the profession’s mantle as the quiet defender of calm and order. But instead, whether it’s justified or not, it’s a profession defined by rage.

The 2019 Lawyer of the Year contest is over and the champion was Christopher Hook, the man who felt his clients suffering at the hands of an insurance company and promptly let the company know by telling its lawyers to feel free to “eat a bowl of dicks” among a LOT of other colorful suggestions. Was Allstate mistreating Hook’s clients? Maybe. Maybe not. Insurance companies screw over people with such frequency it’s hard to tell in any given situation.

In a sense, this year’s contest as a whole was about the perception of the lawyer in society. Giuliani? Dershowitz? Avenatti? Did their contributions this year not just highlight how performative rage has taken over the public image of a lawyer? They defined us all this year through a noxious alchemy of bombast and intimidation. Even in the case of Professor Pam Karlan, the only nominee who conducted herself with professional aplomb, her defining moment was sitting on the receiving end of sanctimonious jackasses — many of them lawyers though that’s probably redundant — who pretended she committed some grave personal attack on Trump’s kid by explaining basic constitutional principles. This was truly the year that lawyers were defined by insults and misdirected rage.

And while the other nominees generated more national headlines, Bowl of Dicks guy is our champion likely because in the pages of Above the Law he became a synecdoche for where we are today.

Because he’s not our hero. He’s a silent guardian. A watchful protector. A guy willing “to let the long dick of the law fuck Allstate.”